~ I recommend using good tasting thin skinned potatoes like Yukon Gold, and preferably organic because they grow underground and sit in the soil.


~I like to microwave my onions for three minutes before I combine them with the potatoes (which brings out the sweetness.)

~When I fry them up, I let them float in an eighth inch of good expeller pressed oil which gives them a crispy texture.

With that said, here's the recipe for:

As is the tradition in my family, I like the texture of my latkes to be pureed, not grated, and I use a powerful blender to do this. The trick is to start with blending a raw egg and half the onions which easily becomes a liquid. Slowly, add the potatoes and when the mixture becomes too thick, add another egg and more onions. If the blender gets full, pour half of it onto a large bowl and continue adding the rest of the onions and potatoes. Pour all of this mixture into the bowl and then add the brown rice flour and salt to taste.
Let the mixture sit for five minutes and get thick. In the meantime, heat up one eighth inch of oil on a medium flame until it is very hot. (Don't be afraid to use oil because it is only with a sufficient amount that you will get the most delicious crispy texture.) Turn on your exhaust fan and make sure you have on an apron because splattering happens. Spoon dollops of the sizzling mixture into the hot oil and when the latkes brown on the edges, flip them over.
Drain latkes on paper bags and serve right away with sour cream and/or applesauce. Leftover cooked latkes can be stored in the refrigerator and reheated in the toaster oven the next day.
ENJOY!!!! 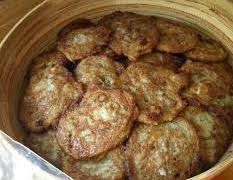 Posted by Arnels Originals: Good and Gluten Free at 6:56 PM