After navigating 6 cities in Spain I am happy to report that our traveling family of 3 is still alive and well.   Actually, the good news is that we didn’t get sick once and that is a blessing.  Almost everyone we talked to, save for a Chinese restaurant knew in a blink what gluten free was and gave us an honest assessment of what was in the delicacies they had prepared. There was even an organic market that made homemade bread and although they made one kind of gluten free bread, the owner was careful to tell me in Spanish that she bakes everything in the same pans and that there was likely to be cross contaminación, which brings me to another important point…. a very small portion of the people in Spain spoke English (not even those at the bus station or airport) so I don’t recommend venturing to Spain unless one in your party has a good command of the Spanish language.  Navigating everything in Spain was stressful enough and I don’t know how we would have survived without me knowing Spanish. I won’t go into detail about my husband’s stolen phone, his lost luggage, needing to change lodging at a moments notice due to cockroaches and unbearable mold, having to call apartment managers about broken toilets, and navigating wiggly roads in Sevilla without road signs, because this post is about eating gluten free but trust me, knowing Spanish is highly recommended.

I can’t tell you how excited I was the first time I saw a loaf of bread sin gluten in a Madrid supermercado or a sign on a store-front in Seville that said “Pan Sin Gluten,” or in Barcelona ”Sans Gluten” and in San Sebastian “Sense Gluten” but unless you like eating gluten free bread with little more than corn starch and potato starch, you will be disappointed because that is all I found in Spain. 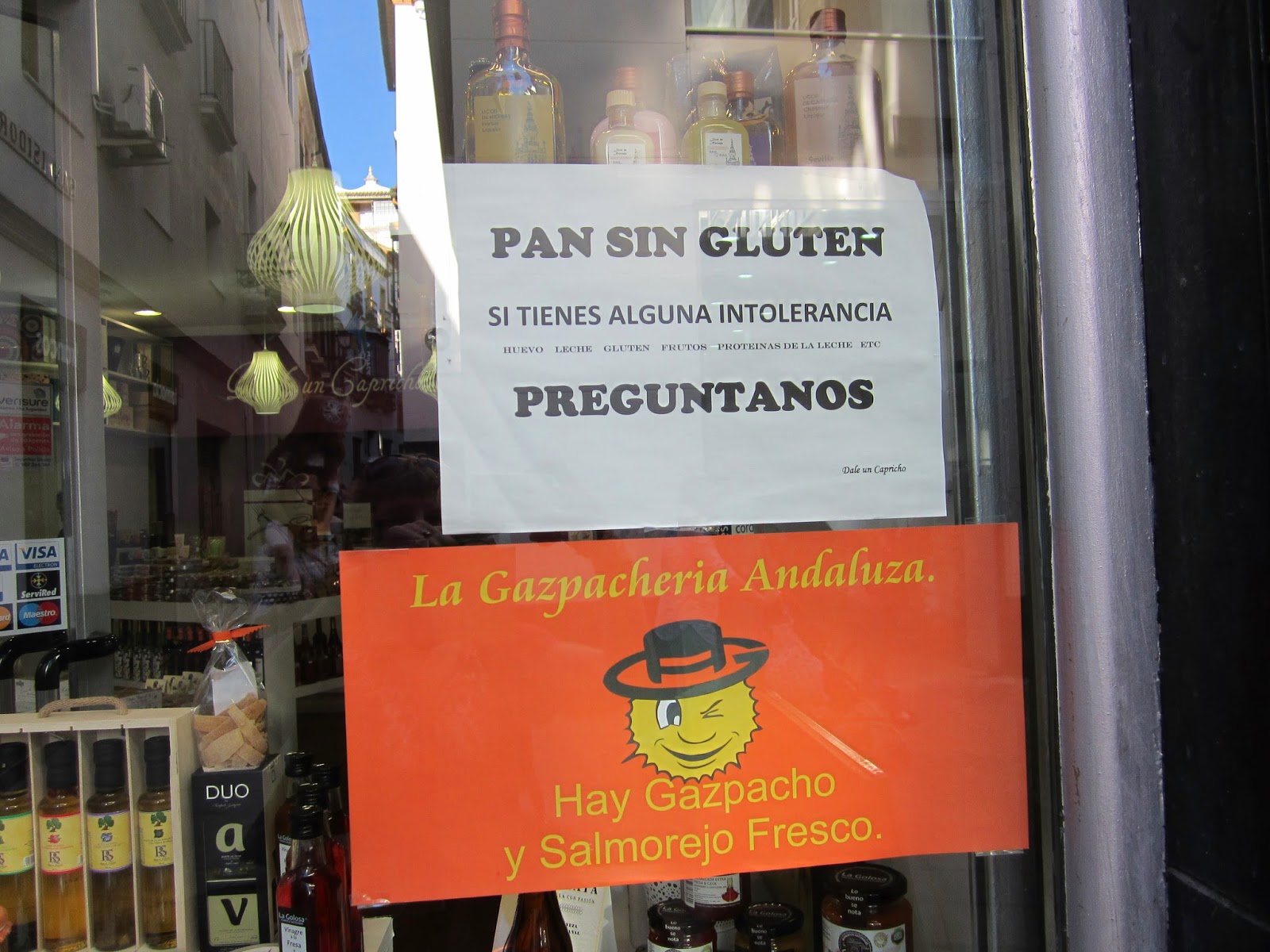 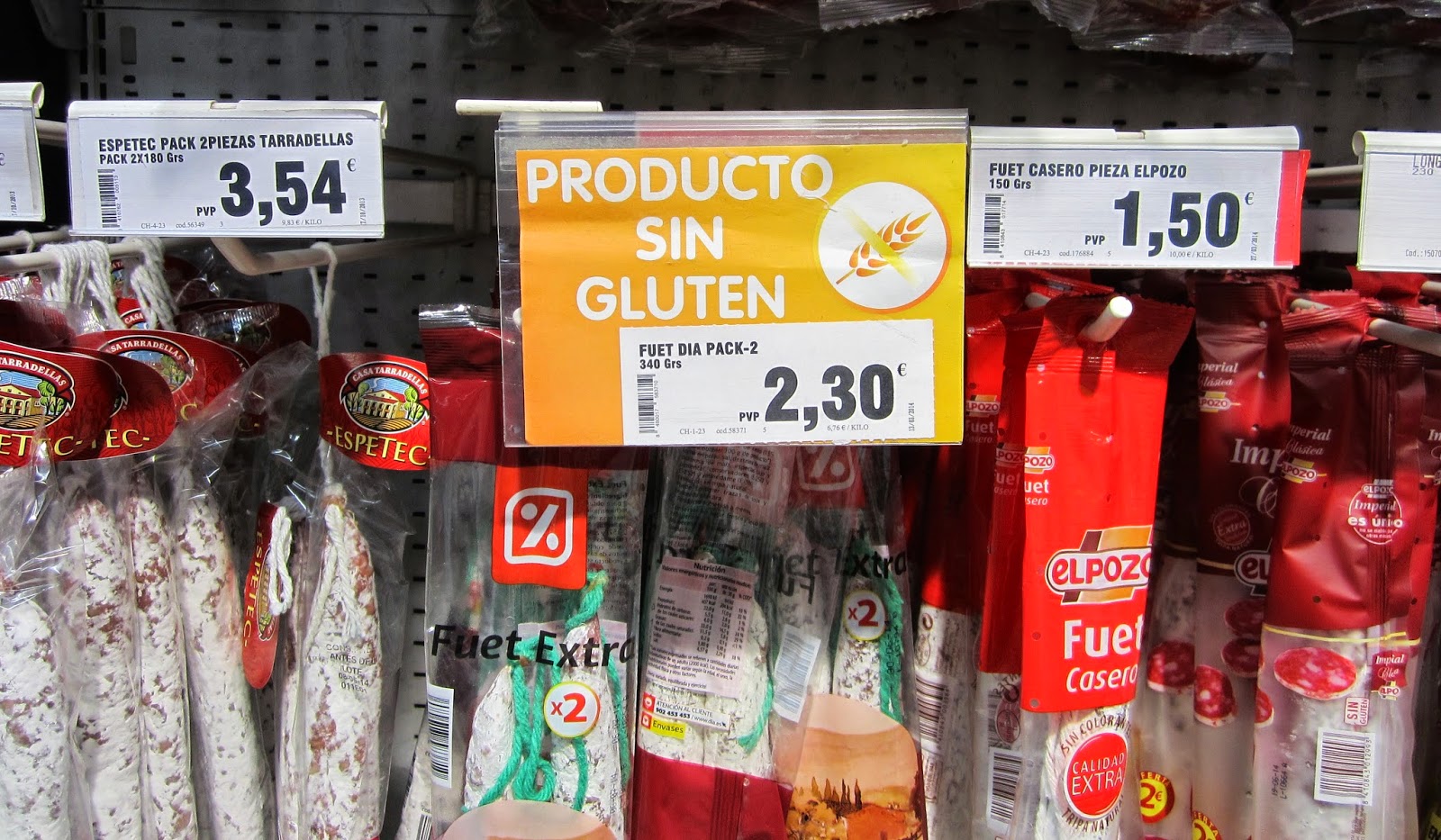 Notice the circle with the wheat sprig and a slash. That’s the official gluten free stamp in Spain.

As a matter of fact, all the gluten free food (bread, crackers, pasta) was made with cornstarch and potato starch. We traveled in Madrid, Toledo, Seville, Cádiz, Barcelona, and San Sebastian and the options for bread, cookies, and pasta were the same almidón de maiz y almidón de patata. I saw a few packages of brown rice here and there, but it was not ground up into flour or an ingredient that was used in their GF products. I did see a bit of tapioca and white rice flour in some products but nothing whole grain.

Gratefully, we stayed in apartments with kitchens and refrigerators so we were able to prepare most of our own meals. The food items I brought with me from home for our two week trip that were most helpful was two packages of Trader Joes brown rice pasta, packets of GF oatmeal, one package of Arnel’s Originals Pancake and Waffle Mix , one frozen loaf of my yummy buckwheat bread, and one package of Arnel’s Originals Buckwheat Bread Mix with a packet of yeast. Believe it or not, it was EASY to bake the bread using a fork to mix the dough and baking it at 176º C. for the usual 30 minutes. I did forget to bring a loaf pan but luckily there was a local “Chino” store where I found one for 3 euros (about $4).

Generally speaking, food in Spain is expensive and the exchange rate for the dollar to euros is not in our favor (for $1 you get  .7 euros and for 1 euro it costs you $1.40). We ate out 4 times and each time it was disappointing. Even the healthy restaurant in Seville whose owner had celiac disease left us wanting. I ordered a “cod salad” which cost $25. I got one cut up orange with slivers of paper-thin cod draped over the orange slices and a drizzle of oil and vinegar sauce that tasted delicious. With it came two little thin GF crackers, which were on a separate plate and after consuming my meal, I was still starving. No veggies, no rice, no other food. My husband ordered a steak and there it was…a steak with the same two GF crackers. No veggies, no potatoes, no other food. We walked home $75 poorer and made ourselves dinner.

The traditional food in Spain is paella, which consists of yellow rice, shellfish, chunks of chicken, and sautéed vegies.  We hunted for GF paella only to find out that they put wheat in the sauce and they use artificial coloring to make the rice yellow, which is supposed to get its yellow hue from very expensive saffron.

There is, however, another traditional food, which was happily on my thumbs up list and that is called tortilla patata. A yummy mixture of potatoes and onions and egg baked like a quiche without a crust. Thank goodness for this because if you go into a bar that serves little appetizers called tapas or pintxos, it is a safe choice.
One place in San Sebastian (Basque country) called Gandaria luckily had pintxos with GF options and for 2.50 euros each; we got fish, cheese and paté on tiny slices of GF cornstarch bread. I asked the waiter to choose 6 varieties of what he liked best and the three of us shared. (See photo below). Most of them were pretty tasty so we wound up ordering 6 more, for a cost of 30 euros ($42), which just took the edge off of our hunger.

Although the primary purpose of our trip was to celebrate our 25th wedding anniversary, and our secondary purpose was to pick-up our daughter from her 3-month stay in Spain, I was eager to explore exporting possibilities.  Hopefully, that will come to fruition.

We started and ended our trip in Madrid, where I knew of a gluten free bakery called Celicioso located a half a block from the Gran Via metro station.  They served the most delicious gluten free pastries but their bread was….well let’s just say that although it was fresh and the best Spain had to offer it needed to be toasted and eaten right away. During the first part of the trip, I brought the owner, Santi, two lightly toasted slices of my bread that I had made 4 days earlier, which had been frozen and defrosted.  Even at that, he was so amazed at the taste, texture and nutritional value,   I wound up leaving him an Arnel's Originals Buckwheat Bread Mix to bake up when we went on to explore other Spanish cities.  On the last day of our travels, we were back in Madrid and Santi and I talked extensively about the possibilities of how he could get the bread mix in bulk to Spain so he could make it for his customers but as of now, it seems too complicated.  Santi has Celiac Disease and when he was diagnosed, he immediately thought of how he could turn lemons into lemonade and that is how Celicioso was born.  At this point, Spain doesn't make it easy to import from no-European countries and although you see Starbucks, MacDonald’s, and Bimbo bread, not much healthy American food passes through their gates….up until now.  All I can say is, if I can help to change that, I will.

Eating gluten free in Spain is definitely not trendy. It seems like the Spanish people with Celiac Disease get diagnosed quickly, and the rest of the population is knowledgeable, helpful, and respectful of their dietary needs.  You never feel like you are putting them out and that was the biggest blessing.
The highlight of our trip was meeting so many delightful people. Although experiencing this historic country with its ancient ruins and varied cultures was amazing, we are glad to be home.

Posted by Arnels Originals: Good and Gluten Free at 6:18 PM No comments: